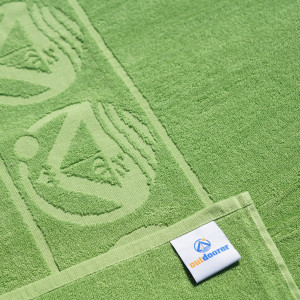 Colourful beach towels in bright colours are not for everyone. This is why Outdoorer created the Beachfex beach towel in one colour with subtle logos on the border. This clean chic is a perfect fit both for the beach and for the bathroom at home.

A decorative bordered logo gives the beach towel that certain something

The decorative bordered logo gives the Beachfex beach towel by Outdoorer that certain something, adding a real touch of class. It is available in two colours, blue and green. The whole-coloured towel fits well in any bathroom, because it does not look like a souvenir from your last holiday.
Twisted terry makes the beach towel very soft

The Beachfex beach towel is made from twisted terry. This special terry is soft and absorbent. The absorbency reduces a little after the first wash, because the movement in the washing machine increases the fabric’s strength.
The XXL size means that getting comfortable on the beach is never a problem

Outdoorer decided to make the Beachfex beach towel in XXL. Its 180 x 100 cm size makes it easy to get comfortable when lying on the beach or on the gym floor.

The beach towel is certified to Oeko-Tex Standard 100
Beach towels come into direct contact with the skin, so it’s important to know whether harmful substances were used in their production. Outdoorer has their beach towels certified to Oeko-Tex Standard 100 by the Hohenstein Institute. During this process, the Institute confirms whether or not any prohibited, hazardous or harmful substances have been used. It’s not just the material itself which is tested; it’s the constituent ingredients as well.

Where can you buy the Beachfex beach towel by Outdoorer?

The Beachfex beach towel can be ordered through Amazon.

We use cookies to ensure that we give you the best experience on our website. If you continue to use this site we will assume that you are happy with it.OkLearn more